We know it’s happening. There are drivers out there that want to put the GoPro they invested in to good use and record their driving with it. We've come to terms with the fact that GoPro owners concerned about protecting their vehicle have more than likely Googled “GoPro dashcam hack.”

But just because people are doing it doesn’t mean that it’s the best solution to record your drives and protect yourself and your car in case of an accident.

We want to take some time to explain why, even though it may be tempting, we don’t recommend that you use your GoPro as your dashcam.

Let’s start with the basics.

What is a GoPro, exactly?

A GoPro is a specific brand of an action camera. Action cameras are best for capturing extreme sports and extreme weather conditions. Common characteristics of action cams are that they are compact, durable, lightweight, waterproof, and have a high rate of frames per second (FPS) in order to be able to catch all of the action. These specs make action cams, like a GoPro, the perfect camera to take on a backpacking trip through Southeast Asia, an off-roading adventure, surfing, or snowboarding.

Okay, so then what is a dashcam and what is it used for? 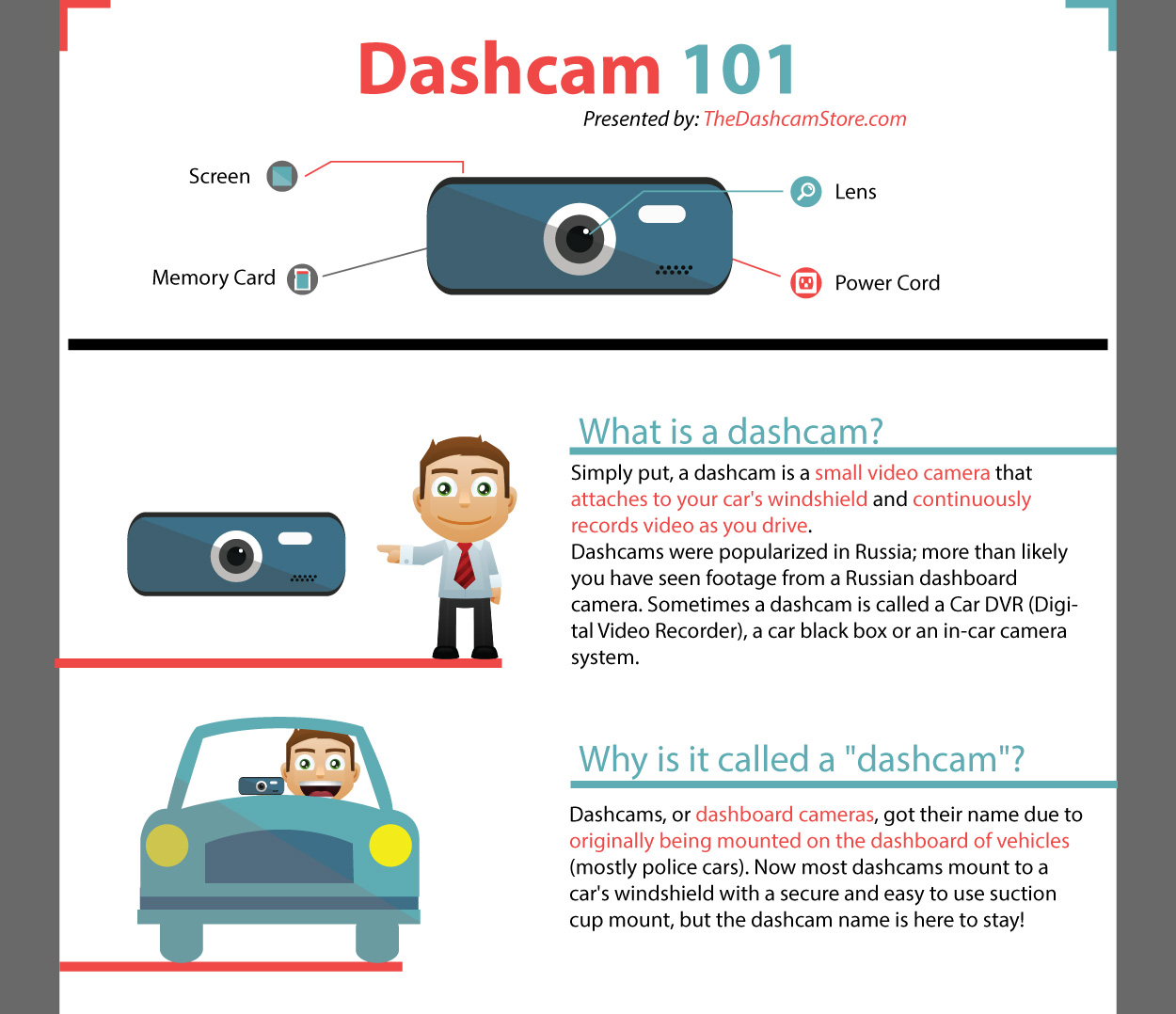 A dashcam is a small video camera that is mounted inside your vehicle to your car or truck’s windshield and continuously records video as you drive. What’s with the dash part? Dashcams got their name and exposure from the dashboard cameras used in police vehicles. If you’d like to take some time to learn the basics of dashcams, check out our Dashcam 101 infographic!

What are the main characteristics of a dashcam?

We’d say there are six fundamental features that really make a dashcam a dashcam:

The GoPro packs some impressive specs, and GoPros definitely have their place, don’t get us wrong! We use them ourselves for sports and other purposes. Our point is that GoPro’s features and design isn’t nearly as useful as a "true" dashcam is, for the everyday driver.

To help us explain, for the rest of this blog post we’re going to compare the capabilities of a GoPro HERO5 Black: 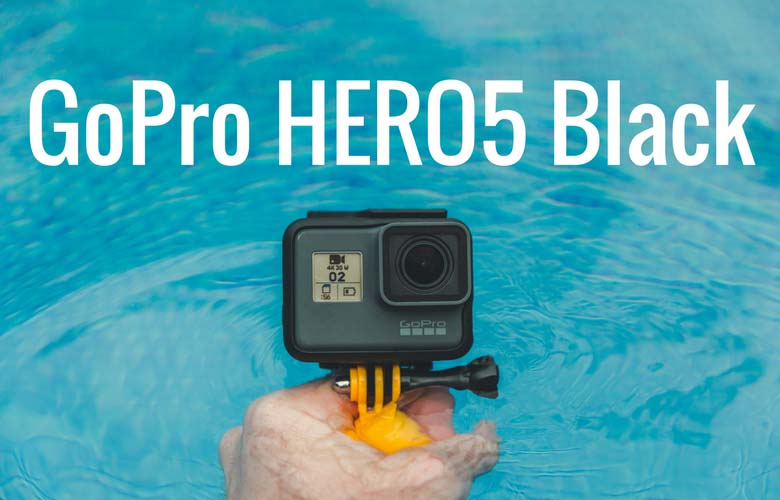 with the capabilities of a BlackVue DR750S-1CH single lens, GPS & WiFi, cloud-capable dashcam: 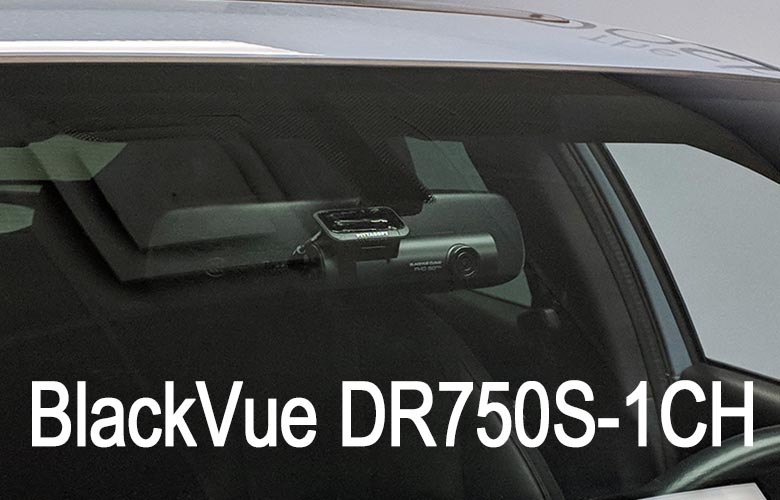 If you decide to use a GoPro as your dashcam, here’s what you’ll soon find out:

You need to manually turn your GoPro on and hit record, every single time.

Alright, it may sound obvious, but if you use a GoPro to record what’s happening outside or inside your vehicle, you need to remember to turn it on and press record before every single drive! Imagine how frustrated you’d be if you were in an accident or saw a meteor and you missed everything because you forgot to hit the record button.

Since dashcams are designed to be kept in your car 24/7 and get their power from your car’s electrical system, a dashcam will turn on and start recording right when you turn the key in your ignition. This leads perfectly into our next point, which is…

GoPro estimates that the battery life of a HERO5 Black will range from 1 hour 30 minutes to 2 hours and 30 minutes depending on the video mode as well as what kind of settings you’re using. Is that long enough to cover your daily commute? What about recording the whole time you're on a roadtrip? Seems unlikely.

If you don’t want to purchase multiple back up batteries or remember to take your GoPro battery inside to charge up and then back into your car on a daily basis before you hit the road, then a dashcam would be a better option for you.

Powering on a BlackVue DR750S-1CH dashcam is effortless: simply plug it into the 12v cigarette lighter outlet in your car and it’ll turn on automatically and begin recording on its own every time you turn on your engine. The best part: you only need to do this one time, since a dashcam is intended to live in your vehicle, 24/7. If you use a dashcam to record your driving, you won’t need to worry about missing a crucial moment because your dashcam will always be charged up and recording. As we mentioned, the automatic "on" feature is one of the standard features that makes a dashcam a dashcam!

Want to keep an eye on your vehicle while you're at work, at the gym, shopping, out of town, or simply sleeping at night? A high-quality dashcam from BlackVue or Thinkware can do this easily! When installed in your vehicle (hardwired to your car battery with a Power Magic Pro or via the use of a dedicated battery pack), a dashcam like the DR750S-1CH will act as a motion-activated surveillance system, only recording video files when the camera lens sees activity, or if the vehicle is physically bumped from the outside. This is perfect for catching a thief or a vandal who messes with your car in the dark of night or someone who accidentally backs in to your vehicle while you're parked at work.

If you use your GoPro while the car is parked, the battery isn't going to last through the night or through an 8-hour work shift. A dashcam solves this problem.

Here's a video from one of our customers to show you how powerful parking mode can be!


"... This WAS my mechanic ... He was fired shortly after I received this impact alert." - Richard Davies


GoPros can’t withstand extreme temperatures like a dashcam can.

The GoPro HERO5 Black community seems to be having some issues with powering on their GoPros in cold weather. High-quality dashcams, like the BlackVue DR750S-1CH, are built to withstand the extreme temperature fluctuations that your car experiences year-round.

BlackVue dashcams do not have lithium batteries, which are known to overheat and cause problems in dashcams. Keeping the driver’s needs in mind, all BlackVue dashcams use temperature-tolerant capacitors. Let us tell you: we keep our BlackVue dashcams installed in our vehicles year-round, including hot Austin, Texas summers. Imagine the internal temperature of your parked car in a sunny Austin parking lot when it’s 105 degrees outside! We’ve never had any issues with a BlackVue dashcam not working as it should in extreme cold or extreme heat.

Everyone knows what a GoPro looks like... and they know how much it's worth.

GoPro has poised itself as the go-to trusted brand in the action cam world. Like Bandaid, Sharpie, and Kleenex became household names for bandages, permanent markers, and tissues, GoPro has virtually erased the word “action camera” from our vocabulary. There is one downside to that level of fame: everyone recognizes the boxy design of a GoPro and knows that it’s not cheap.

Although hacking your GoPro to use it as your dashcam may seem like a great way to get more bang for your buck, would you want to have it in plain sight in your car at all times? Keeping a GoPro mounted on your windshield may cause passerby to do a double take, and may be asking for the curious to check to see if your door is unlocked so they can snag themselves a new GoPro.

We’d argue that, unfortunately, dashcams still aren’t a household name. While we wish that more drivers took advantage of the protection and accountability that comes with a dashcam, the good news for our small but mighty dashcam community is that our dashcams (especially those from BlackVue) aren’t as recognizable as a GoPro. That’s a major factor in what makes a dashcam a dashcam: it’s designed to stay in your car at all times so you don’t have to struggle with remembering to take it down and put it back up all the time.

The BlackVue brand’s sleek, cylindrical shape and black finish make them super discreet. The DR750S-1CH is designed to be low profile and will hide nicely in front of your rearview mirror, keeping it out of your view while you drive and making it hard for onlookers to spot. You don’t need to worry about taking it down and hiding it in your glove box every time you park your car.

Check out a comparison image below, in this case with two Chevy Corvettes. In which vehicle is the dashcam less likely to be noticed from the outside? We feel the answer is fairly obvious. Click the image below to enlarge for a better look. 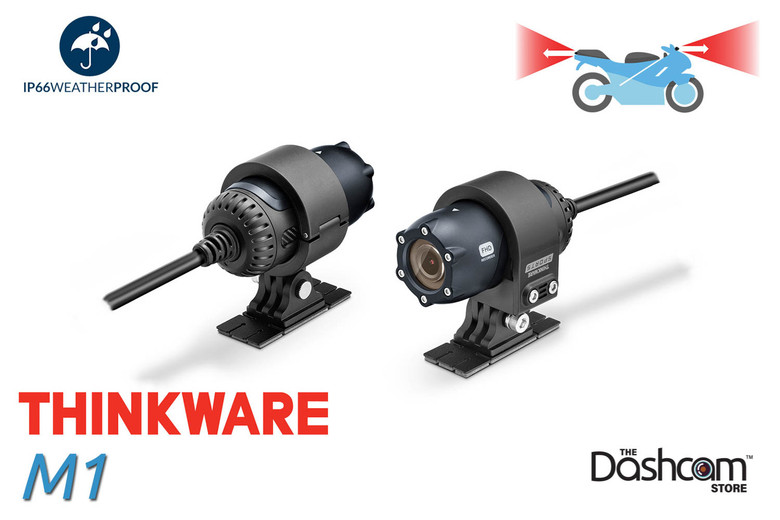 Thinking about mounting your GoPro on your motorcycle, ATV or side-by-side? Think again! With the new Thinkware M1 dashcam, get high-quality video footage from your motorbiking or off-roading excursion from both the front AND the rear! With the M1’s Electronic Image Stabilization feature and Sony STARVIS Image Sensors with Super Wide Dynamic Range and Super Night Vision 2.0, you’ll get a smooth, crisp and clear 1080p video in even the darkest scenarios!

There are many features of the M1 that standout, but the built-in GPS antenna, the built-in WiFi module (connect directly to your mobile device), and the Remote Control (to manually record an event) make it the ultimate motorcycle, UTV, and ATV dashcam.

With all these features and benefits, the choice is clear! The Thinkware M1 is the perfect choice of your next ride. Tell that old GoPro to hit the road!

GoPros are great, don’t get us wrong! Our point here is they’re not great for everyday drivers. Would you hire a professional surfer to be your mechanic? Probably not! It’s the same thing with a GoPro vs a dashcam: dashcams are designed with a driver’s needs in mind, so why would you want to use anything else?

Have we ruined your weekend plans to teach yourself how to hack your GoPro to do double duty?

If you want to explore your dashcam options from the beginning, our Dashcam Buyer's Guide is the best place to start. It will walk you through a few of the top features to consider when researching what the best dashcam for you will be.

If the BlackVue dashcam design caught your eye, click here to Shop All BlackVue Dash Cams or view our 2020 BlackVue Dash Cam Buyer's Guide. BlackVue is the dashcam industry leader, and we're proud to be an authorized distributor of these high-quality and reliable models for the North American driving community.