Free Day Shipping and No Sales Tax to !

Also known as 'add-a-circuits', fuse taps allow for non-invasive installation of a dash cam or almost any other electrical accessory into your vehicle. No cutting of wires or splicing is required, you simply crimp a fuse tap on the end of your bare wire, then plug and play at the fuse box. Take the pain out of 'hard-wiring' with our simple fuse taps.

We take the guess work out of selecting a single set (one type) of fuse taps. We include 4 of the most common types of fuse taps in our bundle so you can be sure when it comes time for installation, you'll have the correct type of fuse taps for your particular vehicle.

Note: We recommend using a quality wire crimp tool such as this one to ensure a strong and reliable connection between your Power Magic Pro bare wires and the fuse taps.

How do they work?

The fuse taps work by adding a new circuit to your existing fuse box. This is done by "piggy-backing" into an existing fuse slot. You simply remove the fuse from the slot you want to use, and put that fuse into the empty slot on the fuse tap. Then insert the fuse tap into the now-empty slot in the fuse box. The existing circuit integrity is not affected and retains its original fuse and functionality. The new circuit comes with its own fuse, so your device and vehicle are safe from any potential shorts or other problems.

Included in the Bundle:

Free Shipping on orders over $40!

Delivery time for free standard ground shipping (USPS or FedEx/UPS) to any of the 50 U.S. states or Puerto Rico is 1-3 business days. Saturday, Sunday, and holidays are not considered business days. Times shown are transit times once the shipment has departed our facility.

Expedited shipping (2-Day, Overnight, etc) is available for an additional fee. Exact shipping options and fees are calculated automatically and displayed during checkout. 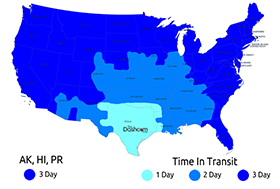